Trending
You are at:Home»The Explorer»Hotels»American Dreams: The Beaumont
By Angelina Villa on July 15, 2019 Hotels

For a Great Gatsby experience in the heart of London, look no further than The Beaumont – arguably the capital’s most under-the-radar luxury hotel. Capturing the essence of the ‘American Dream’, as immortalised by F. Scott Fitzgerald, the hotel is found in Brown Hart Gardens, just minutes’ walk from Selfridges, and has an aesthetic and ethos bound up in the glamour of the Roaring Twenties.

Once the pet project of Jeremy King – of restaurateurs Corbin & King fame – the hotel has since been sold to the Barclay Brothers, owners of The Ritz, although, despite the new names at its helm, it still retains its Art Deco charm and timeless feel which King was so meticulous about. 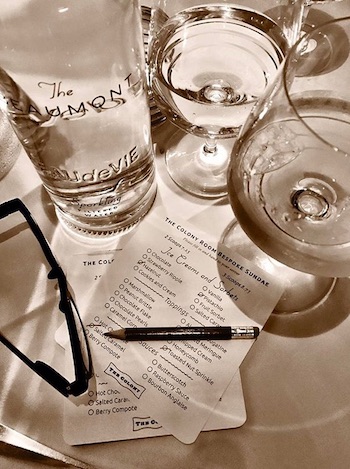 Given its link to some of London’s best restaurants (Corbin & King are, of course, responsible for The Wolseley, The Delaunay and Brasserie Zedel), standout dining remains at the heart of the hotel. The classic Colony Grill Room echoes the great tradition of clubby grill rooms, originally found in London and New York, with a transatlantic menu bursting with crowd-pleasers and dishes prepared table-side.

It’s a glamorous spot to dine, with deep red banquette seating, booths and black-and-white photos of screen sirens adorning the walls. You half expect to see Frank Sinatra sitting across from Dean Martin – it’s that kind of place. Start with half dozen Carlingford Oysters or maybe a Shrimp Cocktail or Avocado Vinaigrette. Then move on to Cajun Spiced Swordfish or a Tomahawk Steak from the ‘Montague Grill’. Desserts are old-school and a delight – from the Red Velvet Cake to the Rum Baba, the Knickerbocker Glory to the DIY Sundae – in which you can mix and match a series of confectionary to make it your own.

The perfect way to kick off any evening, is at the recently refurbished hotel bar. Once known as the American Bar, it has been renamed the Magritte Bar, and has undergone a makeover by interiors guru Nina Campbell. Inspired by the hotel’s art collection, which includes René Magritte’s oil, Le Maitre d’Ecole, many pieces have pride of place in the bar. Adding a rich, sumptuous feel, there is Roses and Oranges by Scottish Post-Impressionist painter Samuel John Peploe, and two portraits, Ruby and La Cocarde, by John Duncan Fergusson, are hung facing the bar. 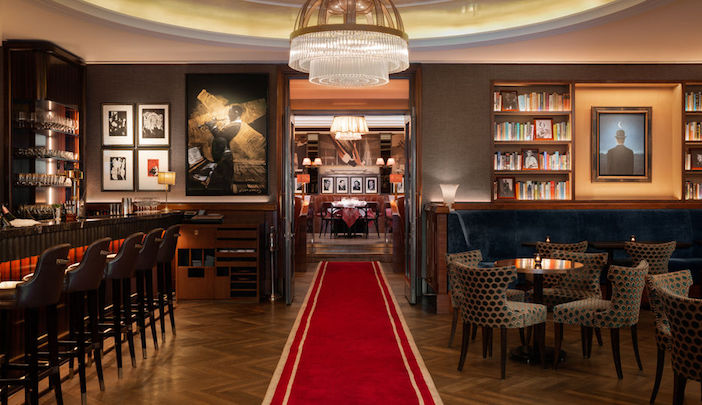 Giving a nod to the interiors style, there are also two rare Charlot Charlie Chaplin posters by Auguste Louis Leymarie from 1917/18. As well as the artwork, the bar also has its own library, which also references the 1920s, and Mayfair as a location. Seating is sapphire-blue velvet and the menu retains a classic feel – with bourbons, American whiskies and classic cocktails a speciality.

The 73 bedrooms have a pare-back period look with their fine wallpapers, Sem cartoons and marble bathrooms. Thoughtful touches include plentiful DR Harris toiletries, a complimentary soft drink mini bar and treats on arrival – such as handmade chocolate and macaroons. For a lavish stay, The Roosevelt suite offers five bedrooms and plush living areas, as well as a wrap-around private terrace overlooking the roofs of Mayfair. 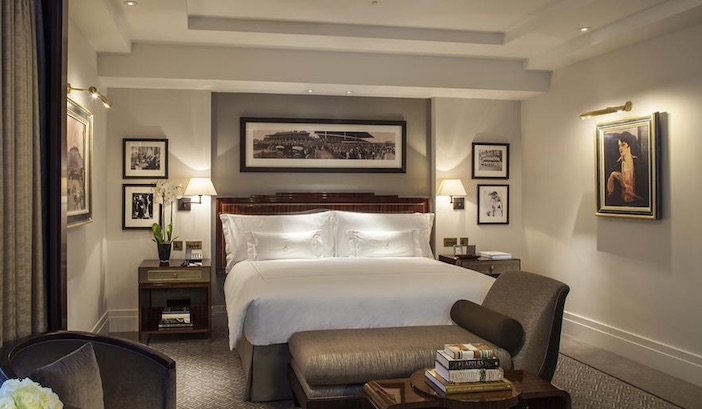 While this is impressive, for something extra special, the hotel is also renowned for having one of the most unusual suites found in any hotel. ROOM – a one-bedroom, inhabitable sculpture by artist Antony Gormley–  dominates the front of the hotel, with its abstract block shaping. Inside, it is a cave-like space, intentionally so – so that guests enter a meditative state to lead them into a good night’s sleep. Sweet dreams, UK-style, guaranteed.

The Beaumont is rated as one of TripAdvisors Top 25 Luxury Hotels of the World. Rates start from £425  for a Classic Room. For more information, including details of special offers such as their ‘Weekend in Mayfair’ rates, visit thebeaumont.com.