There’s a buzz in the lobby of the Four Seasons Hampshire – maybe it’s the children running out of the lounge, or it could be the extended families arriving for the weekend – grandpa, aunts and babies in tow – or perhaps the whoops of joy you can just about make out coming from the grounds… but there’s definitely a frisson in the air.

While there’s no question that this classic hotel offers some of the most luxurious accommodation to be found in the UK countryside (it is a Four Seasons, after all), it’s true to say that it also has captured that magical essence that many luxury country house hotels forget about – fun. 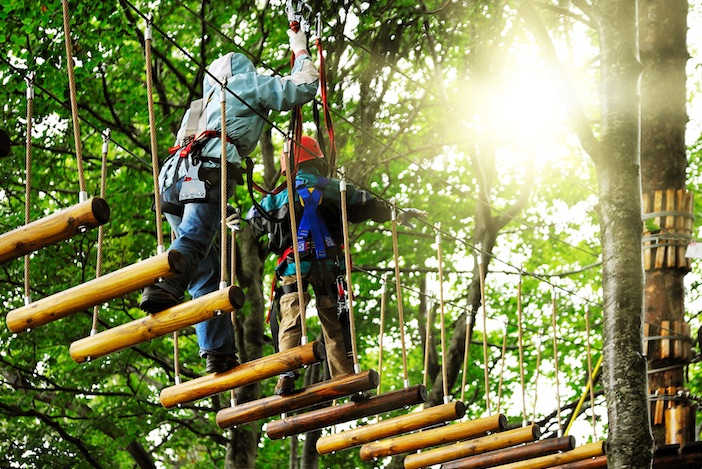 From the tree-top rope walk that is the Highwire Adventure (note: if you think this is just some hotel ‘afterthought’ – think again – it’s a thrilling activity and a real challenge, especially if you don’t like heights) to the Christmas market that will be opening on 5 December – much consideration has gone into just what guests can do after they check in.

In the spa, for instance, carved out of the 18th century stable block, you can be pampered to within an inch of your life (the Neom massages are the dreamiest you’ll come across), but there’s also a light-drenched swimming pool, outdoor vitality pools and the very appealing (for the under tens, and perhaps the inner child in you) Sharkie’s Reef – a watery playground complete with a four metre slide, a rotating umbrella fountain and bubble jets. 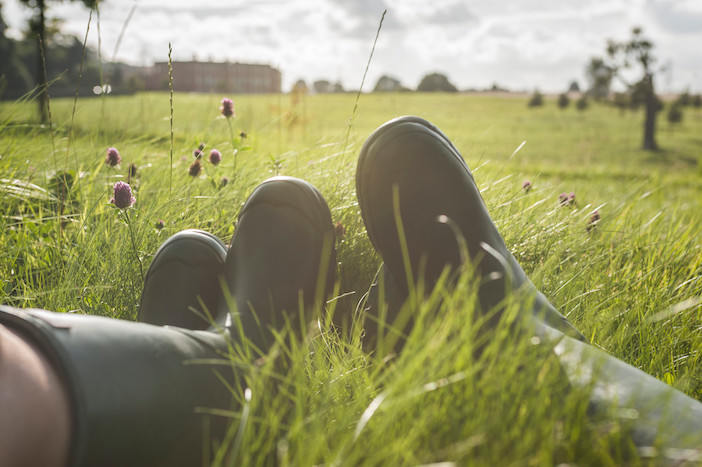 The hotel – once a Georgian manor house that dates back to 1728 – is located in the idyllic Dogmersfield Park, and set in 500 acres of parkland so the hotel makes much of its location. To get into the countryside spirit, there’s a wide range of traditional rural pursuits on offer, including clay pigeon shooting, croquet, falconry and fishing. And, just launched, is a new Bird Watching Experience, which sees the hotel team up with Swarovski Optik (the binocular company which is celebrating its 70th anniversary this year).

The company first started producing binoculars in 1949, and guests are issued with a set of Swarovski Optik CL Companion binoculars, which fit in the hand and are ideal for birdwatching. Guided by ornitholgists Keith Betton or John Clark, the walks take you on a two-hour ramble around the grounds, during which the experts reveal their twitching knowledge. 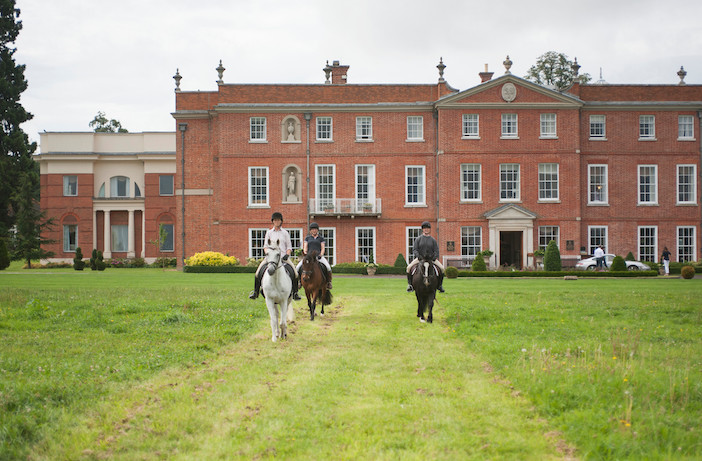 As a consequence to the range of activities on offer married with Four’s Season’s laid-back, yet slick, service, the hotel is particularly popular with families. It’s a no-brainer – children have fun in the great outdoors, while parents can join in or enjoy the sumptuous surrounds. As well as the Highwire Adventure, which includes a low rope course for younger kids, zip lines, a giant seesaw and parachute simulator, there’s an Equestrian Centre for budding horse-riders; a falconry school where you can come face-to-face with hawks, eagles, falcons, hawks and vultures, as well as complimentary seasonal arts, crafts and games.

Adults, meanwhile, will surely be impressed by the ‘deep’ luxury on offer in the elegant bedrooms – from the heavenly signature Four Seasons mattresses to the uber-luxury marble bathrooms with their Asprey products. Rooms are spacious and serene – with a pale lemon, duck-egg blue and cream palette. Antique furniture, thick carpets and heavy drapes bring an old-school yet timeless feel. Meanwhile, public areas – which were given a swish makeover in 2018 by hotel designer Martin Brudnizki – are more eclectic in style. 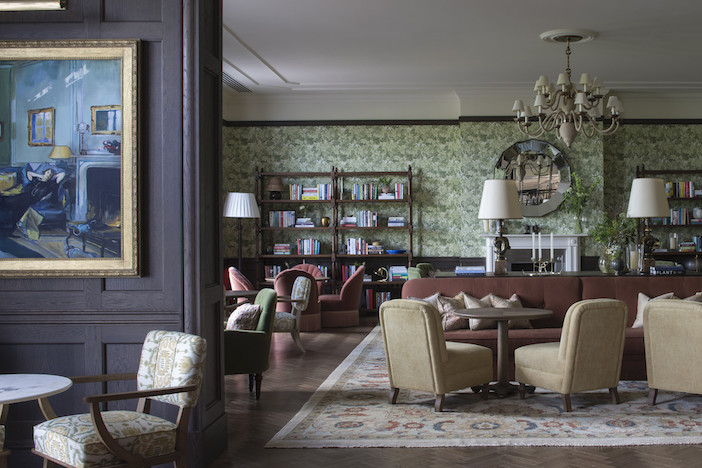 The Bar and Lounge – an ideal spot for long lunches – have a decadent aesthetic, with a glamourous, central red-leather clad bar offset with sage-green leather bar-stools. Cheerful leaf-print wallpaper, open bookshelves and floral rugs add a touch of homeliness, while pale-pink, baby-blue and forest-green velvet seating are straight out of the 1930s.

While the hotel is unmistakeably top-end, there is an all-encompassing feel for all ages at Four Seasons. The signature restaurant Wild Carrot, for instance, has none of the stuffiness sometimes associated to stylish restaurants, despite Paolo Belloni’s menu being nicely inventive with his Italian take on seasonal, British cuisine. A children’s menu goes beyond the usual bland, nursery fare, with enough interesting choices to keep all happy. Many dishes on the  main menu can be ‘simplified’ to suit those with more adventurous tastes. 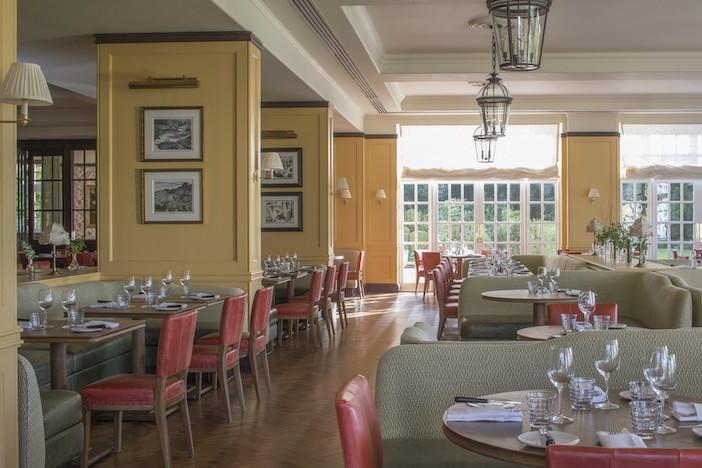 To start, there’s Burrata from Puglia, with carrot ketchup, candied baby carrots, sourdough and anchovies from Cantabrico or perhaps you’ll fancy Porthully Oysters to kickstart your meal? The Devon Crab Cavatelli pasta dish, with lemon and tarragon, is pleasingly simple, yet bursting with taste, in that way that only Italians know how to do well, while the Somerset Salt Marsh Lamb Rack is given a novel twist with roasted cucumber, Greek yoghurt and tomato chutney.

With the festive season in sight, the hotel is now gearing up for even more jollity – from its ice skating ring that pops up in the grounds to the warming treatments in the spa. Helping guests on their way to a stress-free Christmas, is the newly launched Mind Massage experience – led by clinically-trained hypnotherapist, Mark Williams. Aiming to help guests combat bad habits, reduce stress or simply improve mental well-being, the personalised sessions incorporated hypnosis during a relaxing therapy.

What better way to make for a happy, family Christmas?