I have, for years, suffered from a terrible affliction. None that might affect my health (touch wood), at least it hasn’t yet, more my sanity; I have an uncontrollable tendency to double book myself. It stems from an inability to say ‘no’ which itself, I think, stems from a feeling that ‘no’ disappoints. Consequently, it was not uncommon for me to have up to four engagements of an evening. (I’ve got better of late; these days it’s usually only two.) And the unfortunate victim of my last episode of double booking was an old friend, Jess. We don’t meet that often, what with busy diaries and the usual excuses. Come to think of it, it wouldn’t be unusual for one of us to cancel at the last minute; I think that made this fateful night all the more destined. 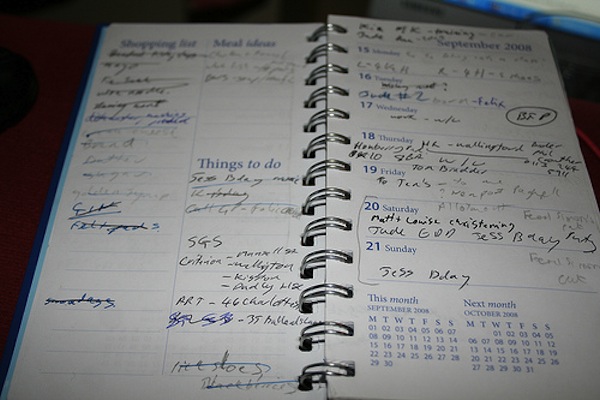 We’d had the date locked down for over a month and plans were made – tickets to the theatre – when, with two weeks to go, an invitation appeared in my in-box. It was one of those that would be impossible to turn down: a cocktail reception with three-course dinner at a stylish London hotel. Naturally, I sat on it until, when pressed, it became too late for me to offer out – Arb contributors are far better at managing their diaries –  so, with 24 hours to go, I couldn’t suddenly RSVP with a decline. There was a fairly straight-forward solution, however; Jess shall be my guest. This assumption immediately became an imposition when I was told that it wasn’t that sort of function, it was named invitees only. I presented my dilemma and an exception was made, but this only compounded matters; not only had I rocked the boat with my dithering than I then became an ungracious guest placing demands on my hosts. It was accepted with good grace, however, and I told Jess the happy news. The play could wait – it hadn’t reviewed well anyway – and when was the last time she’d been to a fine dinner?

Being the launch of a new menu, I had imagined a fairly substantial affair, the sort where many guests occupy the entire dining room, and where it might be straightforward to slip in virtually unnoticed, offering one’s name at the door before being ushered to a quiet, corner table to consider the meal  and settle into one’s own company. 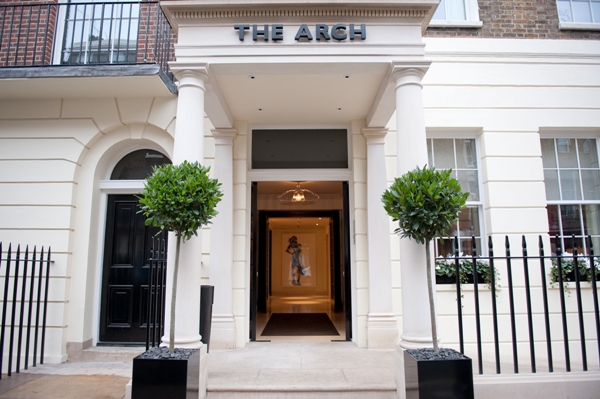 From the outset, however, the entire evening began to distance itself from our expectations. For some reason, perhaps because of its proximity to Marble Arch, I’d imagined the hotel to be a gargantuan building like its neighbours on Park Lane. Not so. As we turned north off Oxford Street and ventured further into the residential streets of Marylebone it became clear any preconceptions we had of the hotel were invalid. Rather, we saw a delightful stuccoed Georgian townhouse complete with columned portico. At this point my impression of the evening began to change, guilt set in. “Ooh, this looks nice…” said Jess. I could have sworn I heard a hint of sarcasm in her voice, cutting that sentence off before she could say, “…nothing like what you told me on the phone.” “Doesn’t it?” I replied, as curious as she was.

We stepped in the front door and I felt more and more like we were gate-crashing a dinner party. The lobby looked like someone’s private rooms, suffused with contemporary art and furniture, and I couldn’t disguise the uncertainty in my voice as I addressed the concierge, “Hello, I think we’re here for the dinner?” I glanced expectantly to what must have been the brasserie to the right, and veered towards it but instead was ushered left and down a narrow hallway, “This way, sir” and waited for the line, “We’ve been expecting you”. As we made our way down said hall I looked to Jess, who looked at me quizzically. At the end of the corridor, an open door indicated what could only be our end point. I desperately wanted to hear the buzz of a crowded gathering emanating from within, turned to Jess, who was wide-eyed in worry and half hoping I might turn us around, who asked, “Do you know anyone else coming?” “I think it might just be us,” I replied. And with that, fate swept us inside. 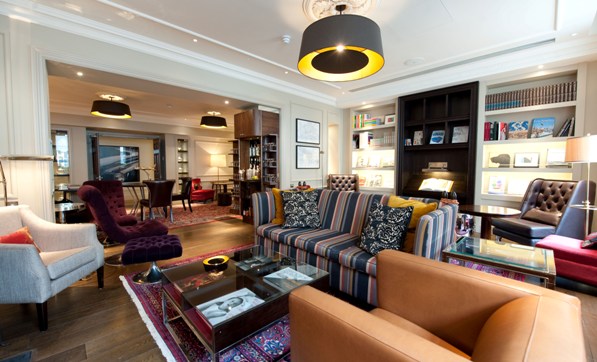 We were in the Martini Library, in the company of perhaps half a dozen others and before I could apologise for having come, their conversation halted and we were set upon by all six pairs of eyes. Unfortunately, our host recognised me and introductions were then made. “I do apologise, I’m the uninvited guest,” Jess ingratiated herself with aplomb. “Yes, I hope you put enough spuds on the boil,” was, for some reason, all I could think to say. “Are you expecting many others?” I asked, looking across at the single table at the far end of library but, alas, it was an exclusive affair and my invitation etiquette remained in tatters.  But, with champagne offered and a selection of sumptuous canapés, we did begin to settle in.

“Can I show you to a room later?” One of our hosts enquired, joining us as our glasses were refilled.
“Oh, we’re not together…” Jess replied, almost apologetic at the suggestion.
“No, I mean for your article, to review.”
“Jess isn’t a journalist,” I interjected, to save any embarrassment, “she’s an interior designer,” I added in an attempt to justify her joining me but it came out with an air of smugness. 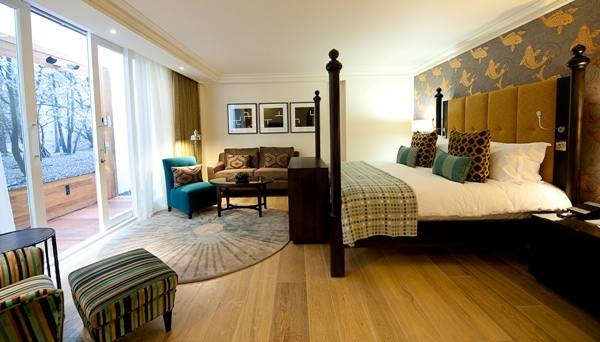 “Ladies and gentlemen,” a voice broke the gentle buzz of conversation and I took the opportunity to extract my foot from my mouth, “if you’d like to take your seats for dinner…” and we made our way to the table. But, here, too, I took a course of action that can only be described as curious at best. For some reason, I thought it important to break up people that knew each other. But Jess and I were the only people that did know each other. So, as I made my way to the opposite end of the table, she threw me a look as if to say, ‘Where are you going?” and before I could move, others had sat either side of her. We weren’t stuck for conversation, however; through a trio of seafood starters and some fine Sauvignon Blanc, the General Manager, Grant, an ebullient Australian, kept those of us at my end on our toes, and Rafi, the owner, held court at the far end, at one point giving us a brief overview of the hotel. Family-run, it’s a conversion of seven Grade II listed townhouses and two mews buildings to the rear, making for a deceptively substantial but delightfully boutique destination a stone’s throw from Hyde Park and the action on Oxford Street.

As we tucked into our mains, the chef pulling out the big guns with slow-cooked beef complimented by a fine Cabernet, at one point, I overheard the lady adjacent to Jess ask her what she did. Feeling responsible for the situation I’d got her in, I attempted a rescue, “Jess is an interior designer,” I bellowed from the far end of the table. It magnified the desired effect. It deflected awkward conversation away from her, certainly, but silenced the room. “Tell everyone what you think,” I added sheepishly, and dived into my dauphinoise. 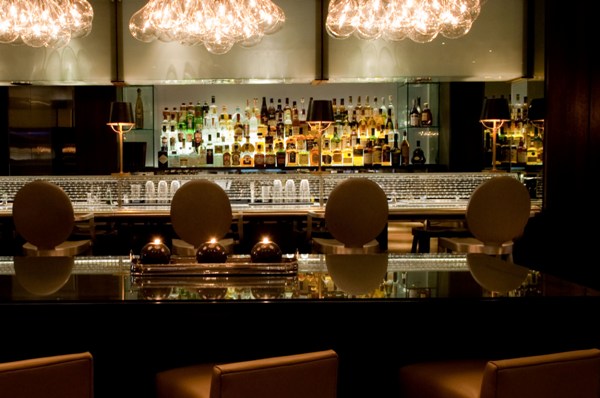 “It’s delightful,” she replied, throwing me a look I could hang myself with later, “contemporary yet classic.” With a murmur of approval the action resumed and I noticed something that at least my social inadequacies had managed to prompt; the other guests began surveying the room, giving it perhaps more attention than one might normally. Amid the plush armchairs, stone fireplaces and intriguing collection of Taschen and Daunt books, I spotted one feature that seemed to symbolise the hotel as a secret, selective hideaway; the drinks cabinet, hidden into the panelling. Rafi saw me eyeing it with intrigue, “We have a unique service we offer here,” he said, “our ‘press to refresh’ service where guests can have their drinks ordered at the touch of a button.” Nice touch, I thought.

It’s symbolic, too, of the sophistication that seems to ooze through the very essence of the hotel; contemporary works from British artists punctuate the more formal Georgian splendour, the HUNter 486 Brasserie – so named after Marylebone’s 1950s dialling code – features a pewter top bar and pressed tin ceiling, and there’s sheer class bubbling in the Salon de Champagne with its intimate booths and graffiti ceiling of famous quotes and tasting notes by award-winning illustrator Sara Fanelli, it’s exceptionally well thought through and all in the detail. And as we concluded our meal with petit fours ice cream lollipops served from the table centrepiece of a smoking silver cauldron of liquid nitrogen and said our goodbyes, Jess grabbed my arm as we left and gave it a squeeze of excited approval.

I knew there was a reason I’d asked her to join me. After all, that had been my plan all along – ahem, the excuse of every double-booker.