Trending
You are at:Home»The Foodie»Food»Culinary Calendar: November
By Angela Clutton on November 2, 2014 Food

“Remember, remember the fifth of November”? Like there’s any chance at all of me forgetting one my very favourite days of the year. Bonfire Night is right up there with Easter and Christmas. I’m a sucker for a good firework display but that’s not the main reason why. It’s the ritual of it; the getting out and about with good friends or family to enjoy something together. And – of course – there’s the great Bonfire Night foods. By which I pretty much mean toffee. Be it treacle, cinder, or slathered over an apple.

For those with not quite so sweet a tooth, a bag of warm, freshly roasted chestnuts that have been rolled in melted butter, cinnamon and sugar can be very cosy to nibble as you ‘ooh’ and ‘aah’ at the fireworks. But really, what’s the point in pretending that anything other than toffee is the star attraction on Bonfire Night.

Toffee and apples are a partnering which began thanks to the autumn harvest festivals that our Bonfire Night (and Hallowe’en) rituals owe a debt to. If the harvest had been a good one there would be plenty of apples about to be turned into sweet treats. We’ve just kept that tradition going. I have three top-tips for toffee-apple making. Firstly, use a good, small apple. Flabby, tasteless ones are just too disappointing. Secondly, use unwaxed apples or else the toffee covering won’t hold. All it takes is some boiling water poured over to get any waxing off. Lastly, liquorice roots (from most health food shops) make good toffee-apple sticks. 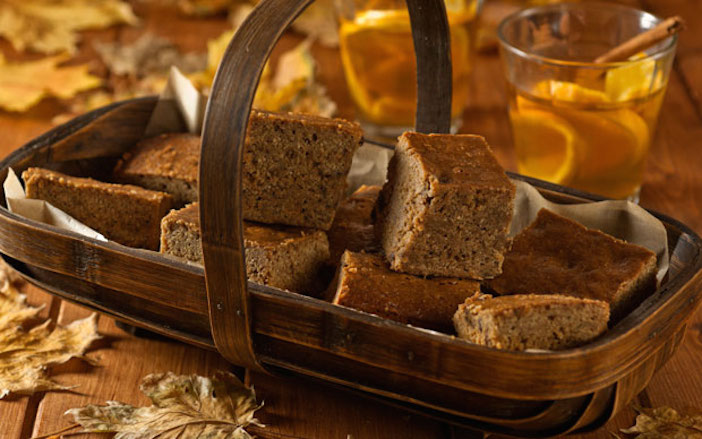 Stickily toffee-esque parkin cake is – or at least, it was – another very popular part of the foods and fun that traditionally surround Bonfire Night celebrations. In the north of England (especially Lancashire and Yorkshire) different areas and families would have their own ways to make it. The differences can be pretty subtle. Parkin isn’t parkin without treacle for that stickiness I mentioned; ginger and spices to keep you warm from the inside; and oats to sustain the hungry hoards.

Every year when my husband and I set out to watch the fireworks it is always armed with little bags of treacle and cinder toffee to indulge the big kids still inside us. Treacle toffee is fun to make mainly for the last bit where you get to whack it hard with a toffee hammer or the end of a rolling pin. Most therapeutic. Cinder toffee is mesmerising to make because it becomes like an erupting volcano of sweetness. The resulting honeycomb is deliciously crunchy – or crunchie if you cover it with chocolate.

You’ll need to work quickly once this gets going so do make sure that everything – including the prepped cake tin and the glass of water – is near to hand as you work. 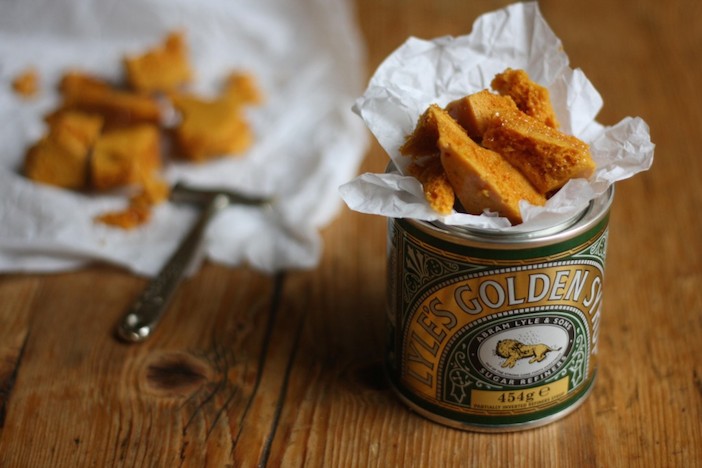 1. Put the sugar, syrup, vinegar and 150ml of water into the pan. Stir over a low heat to dissolve the sugar.

2. Once it has dissolved, turn the heat up high and stop stirring. The mixture will boil and bubble. It’ll start to turn a lovely amber colour and smell yummy. Let it go for 8 minutes or so before testing if it’s ready. Either by using a sugar thermometer and waiting for it to reach 150C. Or drop a little of the mixture into the glass of cold water. If it goes brittle straight way that is ‘hard crack’ and means your cinder toffee is ready.

3. As soon as you get to that point – and no longer or it will go too far and bitterly burn – take the pan off the heat straight away. Stir in the bicarbonate of soda as quickly as you can.

Now is the point to stand back and watch in awe as the toffee does its bubbling lava thing. It will rise and rise and you’ll be glad you heeded my advice and used a very large pan. Just as it reaches the zenith of its eruption give the toffee a stir and it will subside.

4. Pour the toffee into the cake tin and leave to cool. You will already be able to see its glorious bubbles. When it is totally cold, lift it out of the tin and break it up.

In doing that you will inevitably end up with a pile of small honeycomb shards. Just right for adding into vanilla ice-cream for this rather more grown-up seasonal take on toffee apples and cinder toffee.

Halve and core four small, crisp apples. Lay them cut-side up in a baking dish. In a small pan mix together 150ml madeira, 1 tbsp each of honey and butter, 1tsp ground cinnamon and a star anise. Pour that over the apples and bake for 30-40 minutes at 190C. Eat them warm with the cinder toffee ice-cream spooned over and maybe some fresh madeleines or shortbread on the side to dip into the sweet wine sauce. 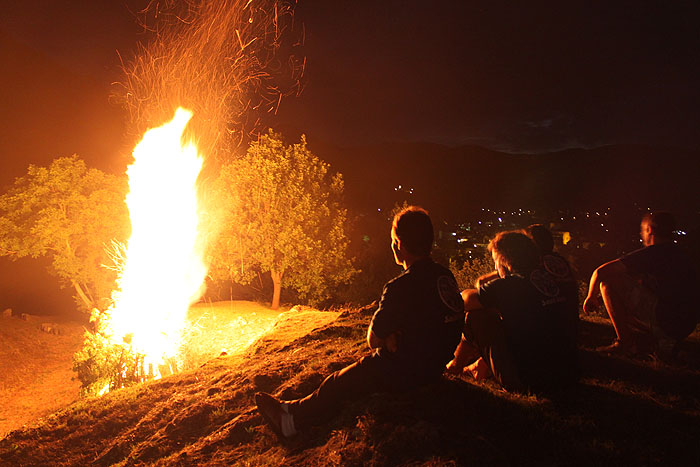 As much as I think Bonfire Night is the most wonderful time of the year, I know Andy Williams was really singing about Christmas. There’s certainly plenty of great food and drinks to look forward to in the build-up to that. Bring on the festivities…