Trending
You are at:Home»The Lifestyle»Cigars»Smoke, Spirits and a Garden Room
By Toby L. White on December 12, 2012 Cigars

December may seem a curious time in which to launch a new menu for a ‘garden’ bar, but then the Garden Room at the Lanesborough is no ordinary outdoor venue. For it is, arguably, London’s most exclusive smoking area. Having been driven outdoors by law some years ago, the capital’s smokers have, somewhat ironically, started a fashion; that of the ‘cigar terrace’. And it seems every London hotel is launching an outdoor space in which to enjoy a fine Havanah. The Lanesborough, however, were doing it first and remain one of the finest. In a discreet outdoor space, well-known to those who can navigate the hallways of the hotel without having to ask for it, it has become a haven for the sophisticated smoking cognoscenti. 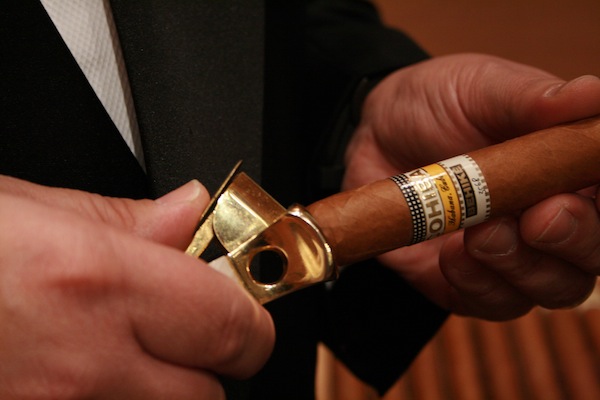 And the new menu is another way the hotel are striving to please their guests; with a cocktail and cigar pairing selection. Matching drinks to highlight each cigar’s unique attributes, Partagas, Cohiba, Montecristo, Romeo Y Julieta, Ramon Allones & San Cristobal are paired with bespoke cocktails designed to perfectly complement each cigar’s aromas and flavours creating the ideal balance for the smoker.

Equipped with an open fireplace, under floor heating, windproof table lamps, and even handmade pashmina shawls and cashmere rugs – the bar, I mean, not me – it was a warm welcome indeed as I was met by Neil Millington, the Garden Room’s cigar ‘sommelier’, and as I sank into a broad leather armchair, Neil guided me through the principles behind the menu. But it wasn’t until I started on my chosen pairing that it really came alive.

As only an occasional – in the traditional sense; the occasions being weddings, stag parties etc – cigar smoker, I was recommended a lesser-known San Cristobal ‘La Fuerza’, being light – but aged, so full of character – and has been married with an 18-year old Flora de Cana rum mixed with cinnamon and chocolate bitters to become the Garden’s own Old Fashioned. Those cinnamon and chocolate notes, with the sweeter rum as opposed to the traditional bourbon, really did complement the smoke. I can say this with authority since I then moved on to the Manhattan but remained with the same cigar. Such adultery was immediately found out; the coffee and spices that infuse the drink barked against the softer San Cristobal, I could almost hear the Montecristo, its official partner, protesting from the humidor. 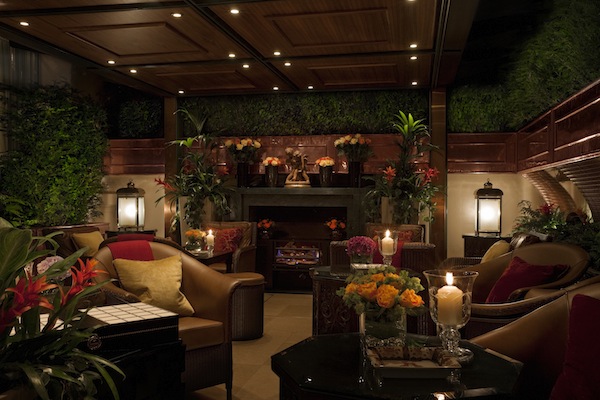 This concoction of two of life’s great pleasures has not attained such heights of sophistication through fortune alone; it has been masterminded by a guru of the drinks and cigar industry, Davide Guidi, who joined the Lanesborough in August as Bar Manager and harks from such stellar heights as The Dorchester, Four Seasons and Fifty St James’s, and who was tasked with expanding on the hotel’s reputation as a premier spot for connoisseurs of the finer things in life. In creating this offering, he and Neil were joined by the man who can lay claim to be one of the capital’s foremost ‘keepers of the bar’, Maestro Salvatore Calabrese, the Lanesborough’s former showrunner from The Library Bar, joining the hotel in a consultancy capacity and adding his years of expertise to the process of creating this consummate pairing menu.

And as I sat back and settled in, Salvatore joined me, not, as I’d feared, to rumble me for the cigar amateur I am, but with the same choice of pairing in hand, commending me on my selection. The evening had been intended to be a light dusting before a dinner engagement but, as one hour became two, and Salvatore’s anecdotes became more and more engrossing, I feared my dinner was destined for the dog.

The Lanesborough’s cigar and cocktail pairing menu, custom made by the foremost figures in the industry and served in one of the city’s most decadent, elegant and comfortable bars, is available now in The Garden Room of the hotel. For more information visit the website.